Waiting for Fang Island to take the stage Monday night was like waiting to open a new present. As a newly minted Fang Island fan, I paid my $25 and showed up at the Paramount on September 28th specifically to see Fang Island, the opener, with the idea that I would hang around to take in the headliner, Matt and Kim.
This was my second show of the month of September; the first was seeing Pavement at the Paramount on September 6th which for me, makes this an exceptionally action packed month.

Fang Island rocked so hard I thought my head would explode. It is no understatement to say that they blew me away. Loud, melodic, hopeful and triumphant. Grinning from ear to ear throughout the set I was sure I looked a fool, or at the very least creepily happy. I suddenly realized I had become that creepy old guy bouncing alone at the concert in a sea of twenty something fans. As it was a school night, I can’t attribute the smile to any debauchery or Bacchanalia, just a deep appreciation for the music and the lift of the melody.

Little did I know that Matt and Kim would be co-conspirators in a mission to permanently disfigure my face into a shit eating feline grin.
From the moment Matt and Kim took the stage, I couldn’t take my eyes off them. They had me. As sickeningly saccharine as this sounds, Matt and Kim are CUTE, all caps. Sidenote, I think they are married. To each other. How cute is that? Kim plays drums and Matt plays everything else. They position themselves at the front of the stage allowing everyone a great view of their handsome selves. Kim, who by the way is the only person in attendance that had a bigger smile than me, played with fearless and reckless abandon. The joy was contagious. Occasionally, Matt and Kim would punctuate the end of a song by standing on their respective stools or seats with a fist in the air! RAWK! 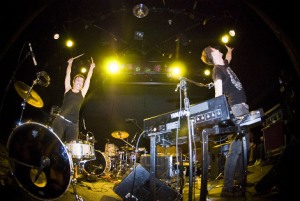 Matt and Kim
Their songs are spirited, upbeat and anthemic. You can’t help but be drawn in. Being at their show leaves you with the feeling that you are part of something bigger than just seeing a band perform live. Matt and Kim are certainly not the only band to have this connection with their fans, but for me it felt visceral and real.

Bottom line. If you want to have fun, go see Fang Island or Matt and Kim. A warning though, your face may hurt as a result of the permasmile.

So I am finally getting around to writing this Melvins review. I figured it was about time that my one dutiful reader farming his days away in Western PA had something new to read. A caveat here, I am not a HUGE Melvins fan. I am however a HUGE “Houdini” fan. I know that to many core Melvins fans, “Houdini” is not considered their best album or most representative of the Melvins. Hell, after reading The Stranger’s preview, it sounds as if King Buzzo himself is not even that big of a fan.

That said, the show rocked. Did I mention that Green River played as well? For those not up on their Northwest Grunge history, here is a little primer. Green River featured singer Mark Arm, bassist Jeff Ament and guitarist Stone Gossard. Later, Mark Arm would be known for his work in Mudhoney and Ament and Gossard would go on to be members of Pearl Jam, and prior to that Mother Love Bone. During roughly the same time period, The Melvins were playing similar music in Montesano, WA and would soon influence a young Kurt Cobain and Krist Novoselic, both of whom would go on to form Nirvana.

Later, after “Grunge” became part of the zeitgiest, Cobain used his influence to get the Melvins a major deal with Atlantic, and the forthcoming release was 1993’s “Houdini”. To many, including myself, this is the album that sparked an initial interest in the Melvins. But I digress.

The show. The show. Well the lineup was as follows; Melvins playing as they did in 1983, then Green River, then the Melvins playing “Houdini” from start to finish. I attended the show with some friends who are musicians and HUGE Melvins fans. They, as did I loved the first Melvins set. Heavy on the punk influences, less on the dirgy, stoner metal. Not too long, just a tease really. After a short set break, Green River came on with Mark Arm attacking the stage like a young Iggy Pop/Mick Jagger. Arm hasn’t aged a day. He looked liked he just graduated high school. Fun stuff seeing these legendary musicians playing in a band that they last played in back in 1987. You could tell how much fun they were having, and the crowd really responded. I thoroughly enjoyed the cover of Bowie’s “Queen Bitch”, but what I really wanted was “Houdini” and that slow, sludgy, stoner metal. Not to be disappointed, the Melvins soon took the stage.

Not only was the lineup different for this, the final set, but the volume was turned way up. At the first chord of “Hooch”, the pit began to swirl – lucky for me, I was nowhere near the pit, but safely up on the mezzanine area by the bar. Highlights include the Kiss cover “Going Blind”, “Set Me Straight”, “Honey Bucket”. Just an amazing show. Like I said the day following the show, if the Melvins are coming to your town, do not miss them.

I am finally getting around to writing a quick review of the My Bloody Valentine show at the Wamu Theater that occured way back on April 27th. First things first, My Bloody Valentine are LOUD. Really, LOUD. This is the first show I have ever been to where the ushers are offering up earplugs to the concertgoers! MBV sets up this auditory assault by creating a layer of incredibly loud treble or high end that kinds of rides underneath all their songs. It sounds cool, but without earplugs my ears would still be ringing. Overall, the show was an incredible experience. The strobe lights, the visuals and the beautiful noise all combined to make this an event I will not soon forget. I, like many others found myself slack-jawed and standing, holding my hands up to the noise and actually feeling it as it moved around the theater. I have never quite experienced this before and found it quite beautiful. If they are coming to your town, go check them out – they will blow you mind!

Jamie and I secured a babysitter (Michelle, who lives down the street, “Yo, what up Michelle?”) and once nine o’clock rolled around we headed out to Neumo’s arriving around 9:15. Both of us were tired, and I was fighting a cold, but we were genuinely excited to be out together and about to see a show.

As we approached Neumo’s we were greeted with the old “who needs tickets” from a scruffy hipster looking to make some money. After all this was Vampire Weekend and the show was sold out. VM now eclipsing Artic Monkeys, Clap Your Hands Say Yeah and Yeasayer in hype factor.

As we moved through the front door, I stole a glance at the timings of when the bands would be performing – that’s when I saw it in bold ominous letters – “Vampire Weekend 10:45 PM”. My heart sank – not sure why I thought they would be going on earlier, but I did, and I surrendered. My fragile eggshell mind cracked – there was absolutely no way I could make it. “10:45 PM? Are you shitting me? I have work tomorrow, and two kids that rise with the roosters!” Jamie concurred – there is no way we would still be standing by the time the band took the stage. I suggested I sell the tickets and Jamie go get herself a drink at Moe, next door. I figured I would sell tickets then meet her over at Moe.

Selling the tickets was not a problem, and I was soon joining Jamie at Moe. The highlight of the evening was witnessing Jamie so excited to be out on a school night. She was beaming, bouncing around the bar, striking up little conversations with strangers here and there. Being happy, having fun. Good times.

I think two guys hit on her, one right while I was walking in asking her what she thought of Yacht (the opening band).

Guy: “What do you know about Yacht?”

Jamie: “Well, my grandmother used to have one, and as a child we would take it to Catalina Island for the weekend”.

Guy: (Furrowing brow, scratching head) “No, no the opening band !”

Jamie: (Almost a spit-take, then just doubled over laughing)

Just a hilarious moment that just cracked us all up.

All in all we missed the show but had a great time out at Moe, having a few drinks, mingling with the hipsters and grooving to the DJ – we need to do that more often. We both forgot about the children and parenting for a couple of hours and remembered what it was like to be out without a care in the world, just enjoying ourselves. Precisely the sort of things that we did back when we were dating; way before marriage and kids.

Yup, Jamie and I are heading to the Vampire Weekend show over at Neumos on March 26th. It is rare that we attend a show together anymore, so I am really looking forward to this. More often than not she is just too tired after a day spent parenting the kids to stay out late. In fact when I mentioned the show to her in an effort to gauge her interest, her response was “What time do you think it will end?”